Magic Quadrant for Cloud Infrastructure as a Service, Worldwide

Cloud computing is a style of computing in which scalable and elastic IT-enabled capabilities are delivered as a service using internet technologies. Cloud infrastructure as a service (IaaS) is a type of cloud computing service; it parallels the infrastructure and data center initiatives of IT. In the context of this Magic Quadrant, cloud IaaS is defined as a standardized, highly automated offering, where compute resources, complemented by storage and networking capabilities, are owned by a service provider and offered to the customer on demand. The resources are scalable and elastic in near real time, and metered by use. Self-service interfaces are exposed directly to the customer, including a web-based UI and an API. The resources may be single-tenant or multitenant, and hosted by the service provider or on-premises in the customer’s data center. Thus, this Magic Quadrant covers both public and private cloud IaaS offerings.

Enterprise adoption of cloud IaaS often begins with modern workloads, emphasizing developer productivity and business agility. But an increasing amount of cloud IaaS is being bought for traditional IT, with an emphasis on cost reduction, safety and security. Infrastructure and operations (I&O) leaders typically lead the sourcing when cloud IaaS is to be used for traditional IT. By contrast, sourcing for modern workloads is typically driven by enterprise architects, application development leaders and digital business leaders. This Magic Quadrant considers both sourcing patterns and their associated customer behaviors and requirements. Many enterprises require third-party managed service providers in order to effectively utilize cloud IaaS. In those cases, enterprises should use this Magic Quadrant in conjunction with the “Magic Quadrant for Public Cloud Infrastructure Managed Service Providers, Worldwide,” which covers third-party managed service providers. 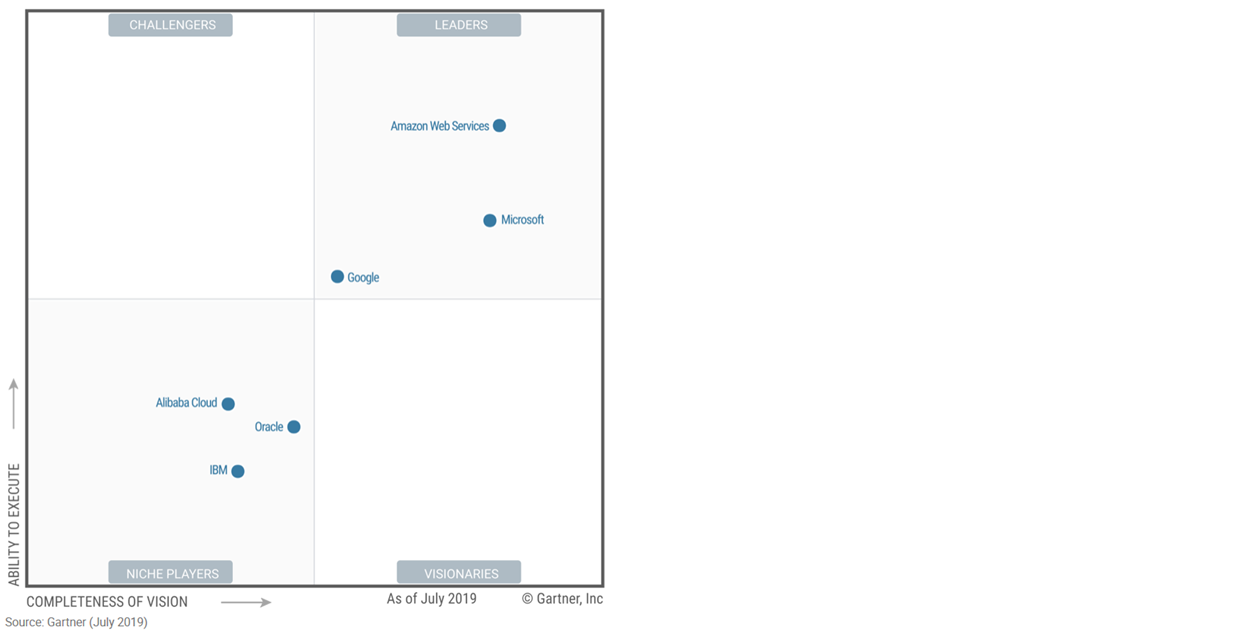 Alibaba Cloud, also known as Aliyun in Chinese, is a cloud-focused service provider with headquarters in China and is a subsidiary of Alibaba Group. Founded in 2009 to provide platform services to Alibaba Group’s e-commerce businesses, Alibaba Cloud now sells to companies around the world. This Magic Quadrant evaluation is focused upon Alibaba Cloud’s international business, which is headquartered in Singapore, and our technical assessment was performed using the international service.

Locations: Alibaba Cloud operates multiple regions in China and additionally has a presence in the U.S. (East and West Coasts), Germany, Australia, Hong Kong, Indonesia, Japan, India, Malaysia, Singapore, United Arab Emirates and the United Kingdom. It has local sales in the U.S., China, Germany, Australia, Japan, Hong Kong and Singapore. The China service portal, documentation and support are in Mandarin. The international portal, documentation and support are in English, Mandarin and Japanese.

Adoption profile: Alibaba Cloud is the current market share leader for cloud IaaS in China (42%) and performs particularly well with Chinese digital businesses and Chinese public-sector entities. In China, Alibaba offers private cloud infrastructure options for Chinese companies that want a hybrid cloud model. Outside of China, despite announced partnerships in 2018 with SAP and VMware, Alibaba Cloud is most typically used by Mode 2 buyers in the Asia/Pacific region seeking a platform for agile workloads.

Recommended uses: Cloud-first digital business workloads for customers that are (1) based in China or Southeast Asia and wish to leverage Alibaba Cloud’s relationship with its parent company, or (2) need to locate cloud infrastructure in China.

Amazon Web Services (AWS), a subsidiary of Amazon, is a cloud-focused service provider. It pioneered the cloud IaaS market in 2006.

Locations: AWS groups its data centers into Regions, each of which contains at least two availability zones (data centers). It has multiple Regions across the U.S., as well as in Canada, France, Germany, Ireland, the U.K., Australia, India, Japan, Singapore, South Korea, Sweden and Brazil. It also has one Region dedicated to the U.S. federal government. There are two China Regions — Beijing (operated by Sinnet) and Ningxia (operated by Ningxia Western Cloud Data Technology [NWCD]) — which require a China-specific AWS account. It has a global sales presence. The portal and documentation are provided in English, Dutch, French, German, Italian, Japanese, Korean, Mandarin, Portuguese and Spanish. The primary languages for support are English, Japanese and Mandarin, but AWS will contractually commit to providing support in a large number of other languages.

Adoption profile: AWS strongly appeals to buyers seeking agile operations, but is also frequently chosen for traditional styles of IT operations. AWS is the provider most commonly chosen for strategic, organizationwide adoption. Transformation efforts are best undertaken in conjunction with an SI.

Recommended uses: All use cases that run well in a virtualized environment. Applications that are potentially challenging to virtualize or run in a multitenant environment — including highly secure applications, strictly compliant or complex enterprise applications (such as SAP business applications) — require special attention to architecture.

Google is an internet-centric provider of technology and services. Google has had an aPaaS offering since 2008, but did not enter the cloud IaaS market until Google Compute Engine was launched in June 2012 (with general availability in December 2013).

Locations: Google has multiple regions across the U.S., as well as a presence in Belgium, Japan, Singapore, Germany, the Netherlands, the U.K., India, Australia, Brazil, Canada, Hong Kong, Switzerland and Taiwan. Google has a global sales presence. Support is available in English and Japanese. The portal is available in English, Dutch, French, German, Italian, Polish, Spanish, Turkish, Russian, Portuguese, Korean, Japanese, Mandarin, Cantonese and Thai. Documentation is available in English, German, Japanese and Brazilian Portuguese. Google operates regions with availability zones, but these zones can be separate buildings or separate power, cooling, networking, and control planes.

IBM is a large, diversified technology company with a range of cloud-related products and services. The IBM Cloud offering has been built on IBM’s July 2013 acquisition of SoftLayer and its previous Bluemix offering.

Locations: IBM has SoftLayer infrastructure in multiple data centers in the U.S., along with data centers in Canada, Mexico, Brazil, France, Germany, Italy, the U.K., the Netherlands, Norway, Australia, Hong Kong, India, Japan, Korea, Sweden and Singapore. IBM offers formerly Bluemix-branded services in the U.S., the U.K., Germany, Australia and Japan. IBM has a global sales presence. It offers support in the wide range of languages in which IBM does business. The portal and documentation are available in English, French, German, Italian, Portuguese, Spanish, Simplified Chinese, Traditional Chinese, Korean and Japanese.

Adoption profile: IBM appeals to its existing customers who have a strong preference to purchase most of their technology from IBM. These customers primarily have Mode 1 use cases. However, IBM Cloud infrastructure capabilities may also be used to complement other IBM solutions, such as Watson.

Recommended uses: IBM outsourcing deals that use bare-metal servers as the hosting platform, where the customer has a need for supplemental basic cloud IaaS. The infrastructure may also be used as a component of applications built using the IBM Cloud PaaS capabilities. It should also be considered in circumstances that require both API control over scalable infrastructure and bare-metal servers in order to meet requirements for performance, regulatory compliance or software licensing.

Disclaimer: IBM did not respond to requests for supplemental information or for a review of the draft contents of this research. Therefore, Gartner analysis is based on other credible sources, including public information.

Microsoft is a large and diversified technology vendor that is increasingly focused on delivering its software capabilities via cloud services. Microsoft entered the cloud IaaS market with the launch of Azure Virtual Machines in June 2012 (with general availability in April 2013).

Offerings: Microsoft Azure is integrated IaaS+PaaS. It offers metered-by-the-second Hyper-V-virtualized multitenant compute (Azure Virtual Machines), as well as specialized large instances (such as for SAP HANA). There is multitenant block and file storage, along with many additional IaaS and PaaS capabilities. These include object storage (Azure Blob Storage), a CDN, a Docker-based container service (Azure Container Service), a batch computing service (Azure Batch) and event-driven “serverless computing” (Azure Functions). The Azure Marketplace offers third-party software and services. Colocation needs are met via partner exchanges (Azure ExpressRoute) such as those from Equinix and CoreSite.

Locations: Microsoft calls Azure data center locations “regions.” There are multiple Azure regions in the U.S., Canada, the U.K., Germany, France, Australia, India, Norway, UAE, Switzerland, Japan and Korea, as well as regions in Ireland, the Netherlands, Hong Kong, Singapore and Brazil. There are also six regions for the U.S. federal government; two are dedicated to the Department of Defense. (The two Azure China regions are part of a separate service operated by 21Vianet Group.) Microsoft has global sales. Documentation is available in English, French, German, Italian, Spanish, Portuguese (Brazil and Portugal), Japanese, Korean and Mandarin. Support and the service portal are available in those languages, plus Czech, Dutch, Hungarian, Polish, Russian, Swedish and Turkish.

Adoption profile: Microsoft Azure appeals to both Mode 1 and Mode 2 customers, but for different reasons. Mode 1 customers tend to value the ability to use Azure to extend their infrastructure-oriented Microsoft relationship and investment in Microsoft technologies. Mode 2 customers tend to value Azure’s ability to integrate with Microsoft’s application development tools and technologies, or are interested in integrated specialized PaaS capabilities, such as the Azure Data Lake, Azure Machine Learning or the Azure IoT solution accelerators.

Recommended uses: All use cases that run well in a virtualized environment, particularly for Microsoft-centric organizations.

Locations: The OCI data centers are grouped into regions, some having only one availability zone, such as those in Canada and Japan. Regions with three availability zones are located in the east and west of the U.S., and in Germany and the U.K. Oracle has global sales. OCI’s portal documentation is available only in English, but the portal is available in 28 additional languages.

Recommended mode: OCI will appeal to customers with mainly Oracle workloads with Mode 1 styles of operation, especially those with performance needs that are well suited to bare-metal servers, and those that do not need more than very basic cloud IaaS capabilities.

Recommended uses: OCI is best suited for enterprises requiring cloud IaaS for Oracle applications and for applications that require an Oracle Database.

Dascase provides critical DevOps-as-a-Service, Infrastructure as a Code, Cloud Migrations, Infrastructure solutions and Digital transformation to high growth companies looking for expert support with DevOps, Kubernetes, cloud security, cloud infrastructure, and CI/CD pipelines. Our managed and consulting services are a more cost-effective option than hiring in-house, and we scale as your team and company grow. Check out some of the use cases, learn how we work with clients, and read more about our Service offering.